Vivid, intense melodrama, vitalized in the absorbing atmosphere of the newspaper game and showing the most intimate details of newespaperdom with all their glamour, romance and tradegy. “The Last Edition,” Emory Johnson’s latest production for F. B. O. comes to the Playhouse for three days, beginning Thursday. Ralph Lewis, who made his roles in “The Third Alarm,” “Westbound Limited,” and “In the Name of the Law,” historic pieces of dramatic acting, is starred by the producer-director in what it is confidently predicted will be the most popular part he has ever played. Mrs. Emilie Johnson, mother of the brilliant, young director, wrote the story, and the Johnsons, in conjuction with their former star, have returned to the old combination which provided the public with all of the thrilling success mentioned above, as well as several others.
For Today and tomorrow the Playhouse is presenting two big features and a comedy. Tom Mix in “The Everlasting Whisper” is one of the main features. The other feature is “Romance Road,” with a big cast, and the comedy is entitled “Scandel Hunters.”

“The Last Edition” at Playhouse Tomorrow

“The Last Edition,” Emory Johnson’s latest production for F. B. O. adapted from the story by his mother, Mrs. Emilie Johnson in the leading role, is a stirring melodrama of the newspaper game.
The re-union of the star and the Johnsons marks the re-establishment of the relations which made “The Third Alarm,” “Westbound Limited,” “The Mailman” and “In the Name of the Law”; which is all recommendation that the present pictures need. As a matter of record, it is the high water mark of melodrama, and seems destined to prove even more popular than the sensation “Third Alarm.”
A gripping story, a superb cast, and the directorial genius of Emory Johnson combine to make this a picture to be long remembered. Frances Teague, Lila Leslie, Rex Lease, Ray Hallor, David Kirby, Cuyler Supplee and several others give the star the best support. “The Last Edition” comes to the Playhouse for its local premier tomorrow beginning a three day run.
The two big featurees on today’s program are “The Everlasting Whisper” with Tom Mix and “Romance Road” with Raymond McKee. 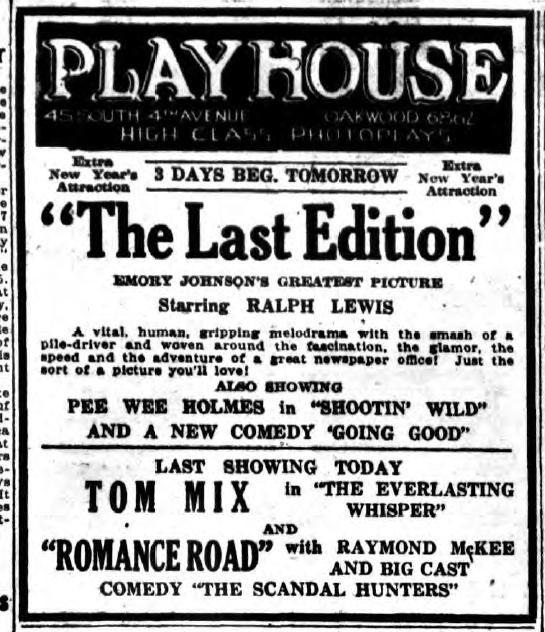 A vital, human gripping melodrama with the smash of a pile-driver and woven around the fascionation, the glamor, the speed and the adventure of a great newspaper office! Just the sort of a picture you’ll love!

Melodrama, with its almost universal appeal, is perhaps the most popular form of picture entertainment. And such melodrama as the “Last Edition” now showing at the Playhouse, has an inalienable right to hold high position among all forms of pictures. For its humanness, its warmth, its thrills, and the tense manner in which its characters are stalked by the real drama that is life itself. “The Last Edition” deserves to rank right at the top of the list of successes which Emory Johnson has directed for F. B. O. Another strong point in its category of virtues is the fact that Ralph Lewis, the veteran character actor whose abilitiy and popularity helped to build up such productions as “The Third Alarm” and “In the Name of the Law” is once more cast in the leading role of a Johnson opus.
Other films on the program are “Shootin’ Wild,” a cowboy comedy featuring that famous Western funny man Pee Wee Holmes. Wanda Wiley in “Making Good” is also showing.