The first stage of digital restoration, repairing damage where possible, and making sure the image is stable and doesn’t move around is performed at a computer console. While the majority of problems will be caught at this stage, it is necessary to go through the material again through projection on to a large screen, replicating the cinematic appearance of the film in theaters. Problems will be considerably more noticeable in projection, as small blemishes appear much larger. Not every issue will necessarily be removed – the restored work can still show part of its heritage – as a movie shot and exhibited on film. 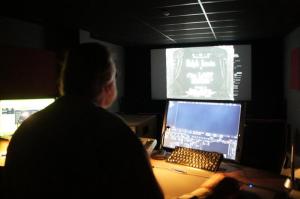 A grader reviewing The Last Edition in projection at Haghefilm Digitaal

In addition to removing visual damage, a restoration will also aim to present a film with the correct color balance. For this, a color grader works to ensure that the brightness and contrast are stable and appropriate over the course of the entire film. This helps to ensure that as little as possible of the visual information of the source film is lost, and can compensate for problems introduced through uneven decomposition to the film source, and the digital scanning of the film in the restoration process. Sudden changes to the lightening levels within the dark environment of a movie theater can cause discomfort to viewers and diminish the cinematic experience.

A scene showing the McDonald´s and Clarence Walker was tinted pink in the orignal nitrate, suggesting the warm emotional bonds between them

When the restoration team is satisfied that it has done all it can and should do, the restoration process is almost over. The need to convert back to analogue for presentation, as is the case with The Last Edition requires a few extra stages. While the digital restoration work was performed upon black and white images, the material that was scanned – and the way in which the film was originally presented – was colored, by the processes of tinting and toning. These processes were amongst the most popular ways of adding color to the early cinema. In tinting, color was added either through directly dyeing the cellulose base of the film, or through dyeing its emulsion. Tinting’s effect was to show color in those areas of the film frame that were most transparent. All the light areas that appeared on the screen then took on that color. Toning worked by the replacement of the silver particles within the emulsion with colored metals, thus serving to replace the black of the dark areas with color. The processes were used both literally, so as to give say a red appearance to fire or blue to water, and figuratively, in the suggestion of different moods for scenes. 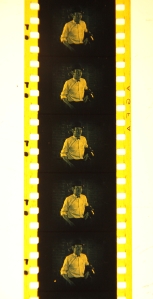 A distinctive colored sequence from the pivitol boiler room scene in the film, tinted yellow and toned blue, conveying the extreme temperature

The addition of color in this way was incredibly popular, with an estimate of the Society of Motion Picture Engineers from 1920 suggesting that over 80% of films produced were tinted. Part of the reason this heritage of a colored cinema has been lost to us is the earlier practice of making black and white copies of these original prints. This practice robbed silent-era cinema of its vibrant appearance and gave the impression that these films had always appeared in monochrome.  If a restoration is to present a work such as The Last Edition with the same rich visual character in which it originally appeared an alternative method – the creation of a coloured copy on color stock – must be used. This can be achieved by the application of the method developed by Noël Desmet of the Cinémathèque Royale de Belgique. Rather than dye sections of the film to tint them, or alter the chemistry of the film as did the original toners, the Desmet method sees the film first transferred to a black and white internegative. A new film print is then struck on color film stock using the black and white internegative and carefully calibrated colored lights to print the scenes with the appropriate colors. This newly transferred print then serves as a faithful recreation of the coloring indicated in the original print. 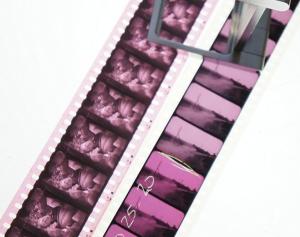 The restoration team check the original nitrate print to determine the lighting to be used in coloring the new print.

Having created the new print, all that remains is to watch it by projection and check that the coloring work of the Desmet method has produced colors to match those noted in the original. The calibration of lights for subsequent prints can then be changed if required.  For The Last Edition it was also an opportunity to determine a correct projection speed. While surviving records such as musical scores, projection instructions, director’s notes and scripts may provide information on the original projection speed for a film, no such records have been discovered for The Last Edition. Reviewing the speeds of The Last Edition‘s characters as they move through San Francisco suggests a correct speed of 20 frames per second (fps). The new print, colored to match the original, and projected at an appropriate speed, can now serve to present The Last Edition to modern audiences as closely as possible to that way in which it would originally have been seen.